This forum is for discussing the Reason Rack Plugin, the version of the Reason rack that runs as a VST3, AU, AAX in other DAWs.
12 posts • Page 1 of 1

Had R12 since launch, wasn't using R11 so this is my first couple of days with the RRP.

I have had the following error twice now 'Failed to open GUI support library' when adding the RRP to a track in Reaper. after the error message R12 splash screen appears as normal but then hangs, and makes Reaper crash.

Anyone else having this issue in this or any other hosts?
Top

I have started getting this as well.
Top

Same here. Any fixes yet? I used R11 without crashes in Reaper, but now am getting many crashes throug this error in R12...
Top

So are both of you using Reaper also or are you seeing this in other hosts? We'll have to wait until the October update to see what fixes for the various issues introduced in R12 are included I suppose.
Top

Ahh well this is more than a bit concerning. I use Reaper, Windows 10. I was (begrudgingly) going to upgrade to 12 before the price went up to $200. Now I'm going to be forced to pay for an update in the HOPES of it getting fixed sometime in the future.

Listen to these and more here! : https://soundcloud.com/sgcomposing
Top

Problem still exist in new update. If I open RRP in new project in Reaper - it works fine, but if I import midi and try to add RRP into existing midi channel - it crashes every time. I recorded short video, to show errors.

Had the issue again yesterday myself. Really annoying. Basically means I'm staying well away from RRP at the moment

I was having this problem and found a workaround. 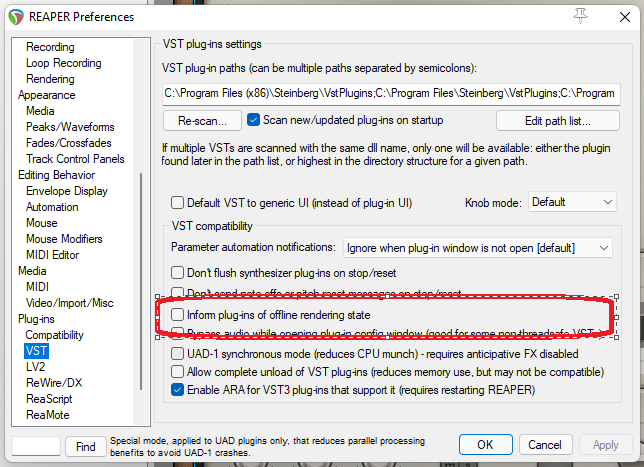 Hmm. Interesting. Will take a look, thanks... and presumably you mean in REAPER preferences

Thanks, "offline rendering state" seems like works for now.
Top

I've not had any further instances of this error since unticking 'inform plug-ins of offline rendering state' so good call gribbly on that one.

I've had more time to return to trying the RRP in REAPER for new projects rather than opening R12 standalone and to be honest I'm warming towards it in the way that I hoped I would - and not having to deal with this intermittent error is also helping with adopting this new approach to making electronic music with Reason.

I'm feeling pretty pro-RRP at the moment mainly due to the ease I'm having using REAPER's automation items, which work in pretty much the same way Reason's do. Except in REAPER I can assign any keyboard or mouse combination I want as a shortcut for creating automation for whichever parameter I last touched (E.g. the pattern select on RB's Sequences) and having it appear in the timeline as an envelope, then select a portion of time and use another key combo to make an automation item that can be shifted about preserving its points and length or be repeated or stretched by click-dragging the item.

Because I can toggle show/hide active or all automation lanes for a track or all tracks (again with custom shortcuts) and the racks themselves are hidden until I toggle them to appear (custom shortcut... again) everything is feeling very neat and tidy and it is all working smoothly right now which is great. Many of my most used shortcuts for showing and hiding the RRP and showing/hiding/assigning automation are also mapped to buttons on the side of my mouse which is totally power-user

Opening a REAPER project that uses at least one instance of the RRP means two splash screens as Reason opens at the same time as REAPER loads, so that adds seconds to getting started but it's OK and to be expected I guess. Perhaps RS will find a way to have the RRP load faster but it's not a major issue.

A small point of contention that I'm encountering is the connection between the range of numbers displayed in REAPER when adjusting automation levels and the parameter being adjusted. With the VSTs I use REAPER is reading a number that is relevant to the parameter being adjusted - for example the mix of a reverb VST appears as 'Mix' and the number is presented as a percentage between 0% and 100% as you would expect, and with a 'Drive' parameter it shows 0.0db-24.0db just as it appears on the VST UI. But with seemingly any parameter being adjusted in the RRP you just get a generic display of 0.0000 to 1.0000 - even if you are automating E.g. a sequence slot on a device that has 8 sequence slots and 'off', so a total of 9 positions. So REAPER is spreading 9 possibilities across 0-1 and it isn't always obvious where in the range the desired sequence slot is and you have to use trial and error. Once I've found it I make an automation item and copy and paste that about as I need to.

So it would be great to see the Reason Rack Plugin communicate parameter names and ranges more clearly to the host software in the future.

Overall I am liking the RRP, and probably preferring it for projects as I am more familiar with navigating REAPER's timeline and editing abilities than I am Reason's. It pretty much is the best of both worlds for me. However If I want to just play about with CV and do weird sound design it is probably still quicker to open Reason standalone. The best of both worlds can still mean just one or the other too