Want to talk about music hardware or software that doesn't include Reason?
17 posts • Page 1 of 1

In terms of hardware options out there, I'm most interested in this one, aside from Bass Bot.
Forum Rules and Guidelines

I have nothing to add. I want it.
Top

Never understood the fascination with the 303 even though I like House and Techno.
Top

I guess you either hate or love it.. I'm in the latter group.

That being said, first pics are being posted.

If it sounds close, it might be my first behringer synth. 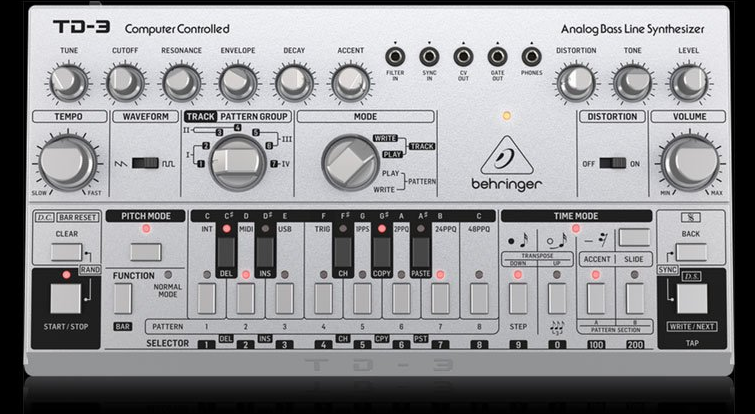 That being said, first pics are being posted.

If it sounds close, it might be my first behringer synth.

Looks pretty close to the original. A few additional things and some stuff moved around slightly.

And here's the back panel:

Seems they are mostly looking to appeal to those who simply want a classic TB-303 remake. Aside from the built-in distortion (which is apparently modeled after the Boss DS-1), and USB MIDI, it doesn't look like they've included much additional to the original... Doesn't look like there's another way to sequence aside from the original method. And no display for tempo (à la Korg Volca), but I guess most people will be syncing over the 'sync in' or over USB/MIDI.

Maybe keeping things very basic is a way they hope to keep Roland at bay? Since Roland's latest digital iterations focus on additional functionality... Interesting choice though in the name "TD-3"... I know they've been using the 'TD' naming convention, but TD-3 is actually another product by Roland (V-Drum set), although superseded by other V-Drum kits.

Looks cool. I could see myself hooking this up via USB to be controlled via ABL3's sequencer

It's hard to move away from being able to use the advanced random mode of ABL3 and even the step record mode. But there is something to be desired in having a true analog sibling...and with a price from Behringer which I assume will be pretty hard to beat.
Forum Rules and Guidelines

miscend wrote: ↑
06 Nov 2019
Never understood the fascination with the 303 even though I like House and Techno.

Listen to some acid then.
This is a block of text that can be added to posts you make. There is a 255 character limit.
Top

I half anticipated some kind of "random" mode for the step sequencer.

However - the fiddly and (apparently) unintuitive process of programming the sequencer, its slides and accents and all the trial and error... They must be a part of what makes a 303 sequence sound like a 303 sequence. If we want to hit "random" over and over until we get something good or nearly good, we can just do that on ABL3, or other step sequencers in our DAWs, and then copy the result over to the Behringer.
I'd say if they're just giving people a 303 à la carte, then that sequencer has to be spot-on.. Can't wait to hear more....
Top

I mean.. Roland could have sold a remake for the duration of a decade at an incredible margin because the original was so sought after. That train has departed now for good.

Edit: that price point of ~150€ is the real punch to the face

In terms of hardware options out there, I'm most interested in this one, aside from Bass Bot.

Sounds spot on to me.

These will sell like hoooooot cakes. And Roland could have been making them all along. Analogue ones. For $150-$200. Nuts.
Top

First time this ever happened to me. Oh well, I hope the reship is quick. Cali is still sleeping, atm...

But - this 3 looks interesting. The touch of CV is Nice. Filter IN? CV or Audio?
Touch pads would've added a nice, new, dynamic touch to those awkward 'keys.'
Top

Excellent video from Loopop comparing the Behringer TD-3 with the original + 2 other clones. I think the Behringer clone sounds the least closest to the original. But as he points out no two original TB-303's are alike. Especially at this point in time considering their age. But the original machine does still have an extremely strong & identifiable character. Having said that these are all very decent clones & the Behringer TD-3 will be dirt cheap. I'm just not sure we need this in 2019. I'm perfectly happy with the ABL3 RE for the amount of use it gets. It's a very good sounding clone. Pair with a MIDI controller, which is easy due to the small amount of controls, and it's a lot of fun to jam with. Best thing you can do with a 303 in 2019 but I will always have a soft spot for a bit of Acieed

ABL3 would be the best 303 clone if they had managed to get rid of the click issue. It's just unusable from an external sequencer.

Td-3 filter in is audio in (too bad).
https://technommunism.bandcamp.com/
Top

And about the loopop video : you gotta compare what can be compared.
First, compare the TD3 with the original 303, and to other 150€ clones, not 500€ clones.
Second, compare the sounds, not the value of the knobs! It's so obvious td3's cutoff and resonance are pushing further than the original, so step back a little if you want to compare the sound!
Can't wait to receive mine
https://technommunism.bandcamp.com/
Top
17 posts • Page 1 of 1