This forum is for discussing Rack Extensions. Devs are all welcome to show off their goods.
9 posts • Page 1 of 1

As you might have read the A-List drummer series (= A-List Classic Drummer, Power Drummer & Studio Drummer) have been discontinued and replaced by the 'original' virtual instruments as developed by UJAM.

Now I'm not planning on doing an in-depth comparison between all devices (this is a first impression after all and besides: without audio it wouldn't be a fair comparison anyway) but I still wanted to share. 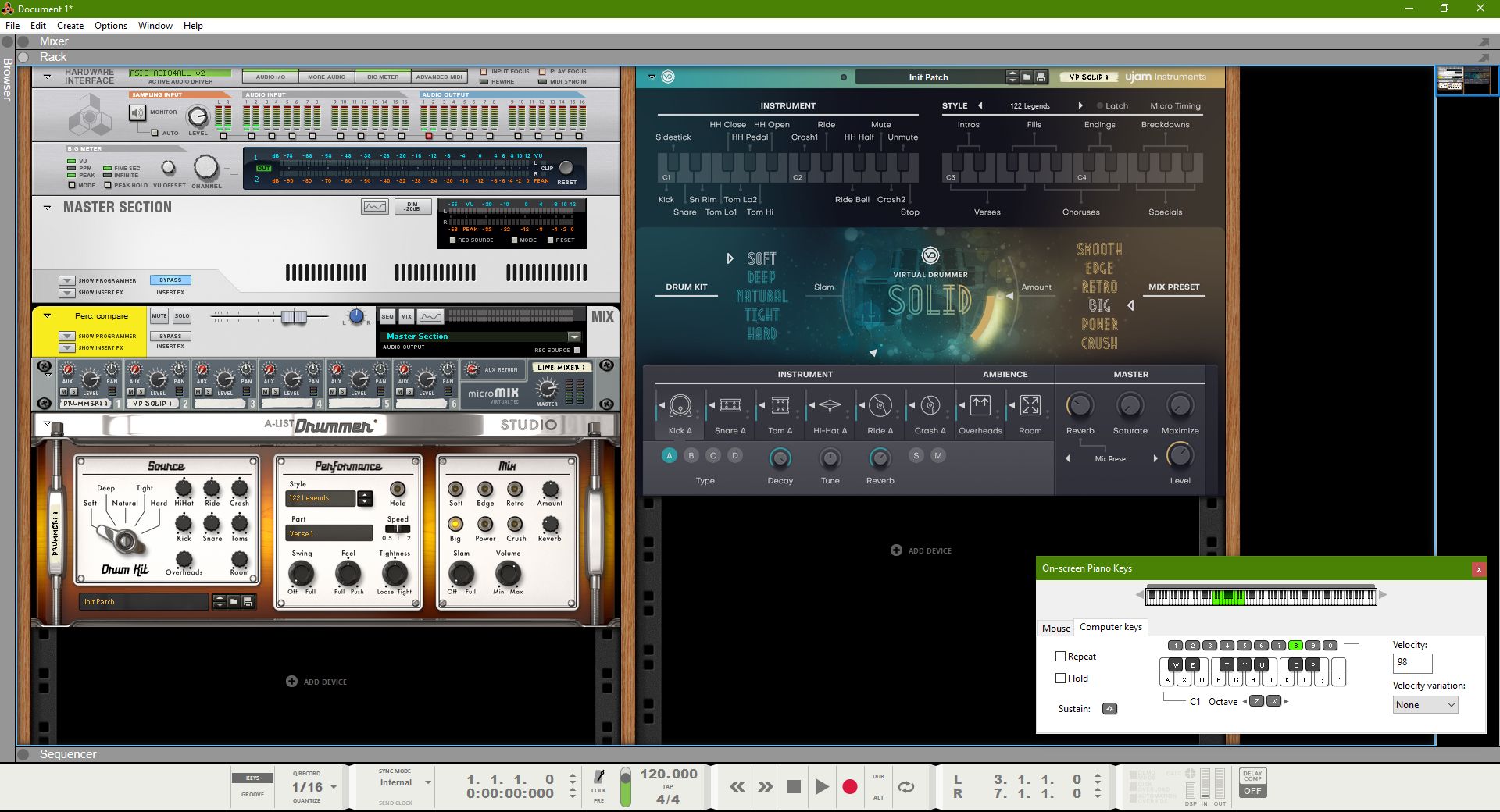 Although I personally still think it's a little weird to address the way a device looks in the rack (instead of fully focusing on its sound) it is something which some people find important and as such...

As you can see the 'new' Rack Extension (shown on the right) is a lot bigger than its previous counterpart (shown on the left, at the bottom). Although this could be picked up as a possible con I personally think it's quite useful to have all the information you need right in front of the device. Just by looking at SOLID you'll see how the keyboard has been divided between the instrument parts (= the individual percussion sounds) on the left and the automated loops on the right. Better yet: they even show you the sections that can be used for specific needs such as the intro, a filler section or choruses, verses and specials.

Another aspect, in my opinion more important, is the amount of customisation you can apply. A-List basically allows you to select a drum kit and apply some customisation to the sound using the 6 knobs you have at your disposal. Actually only using a single knob: the one matching the drum you play. Virtual Drummer on the other hand allows you to quickly select between several types of a sound and set some specific parameters for that type of sound such as decay, tune and reverb. This can be set up on a per-sound basis which doesn't work like that in A-List.

However, when it comes to connectivity within the rack then you'll notice that both devices are pretty much the same: 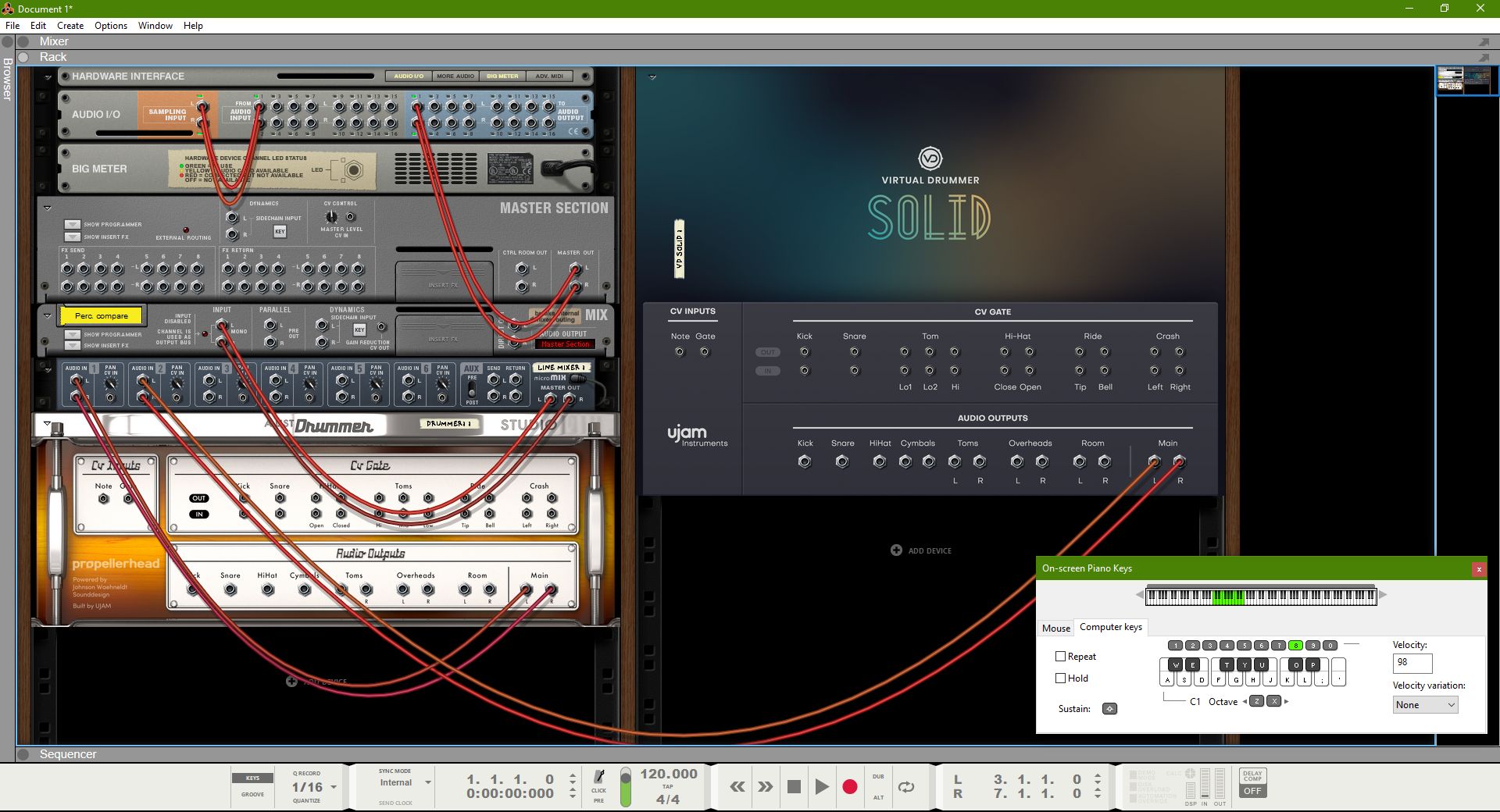 And speaking of functionality... I think it's only fair to mention that the Virtual Drummer device has one huge advantage which is the visual feedback it gives you: 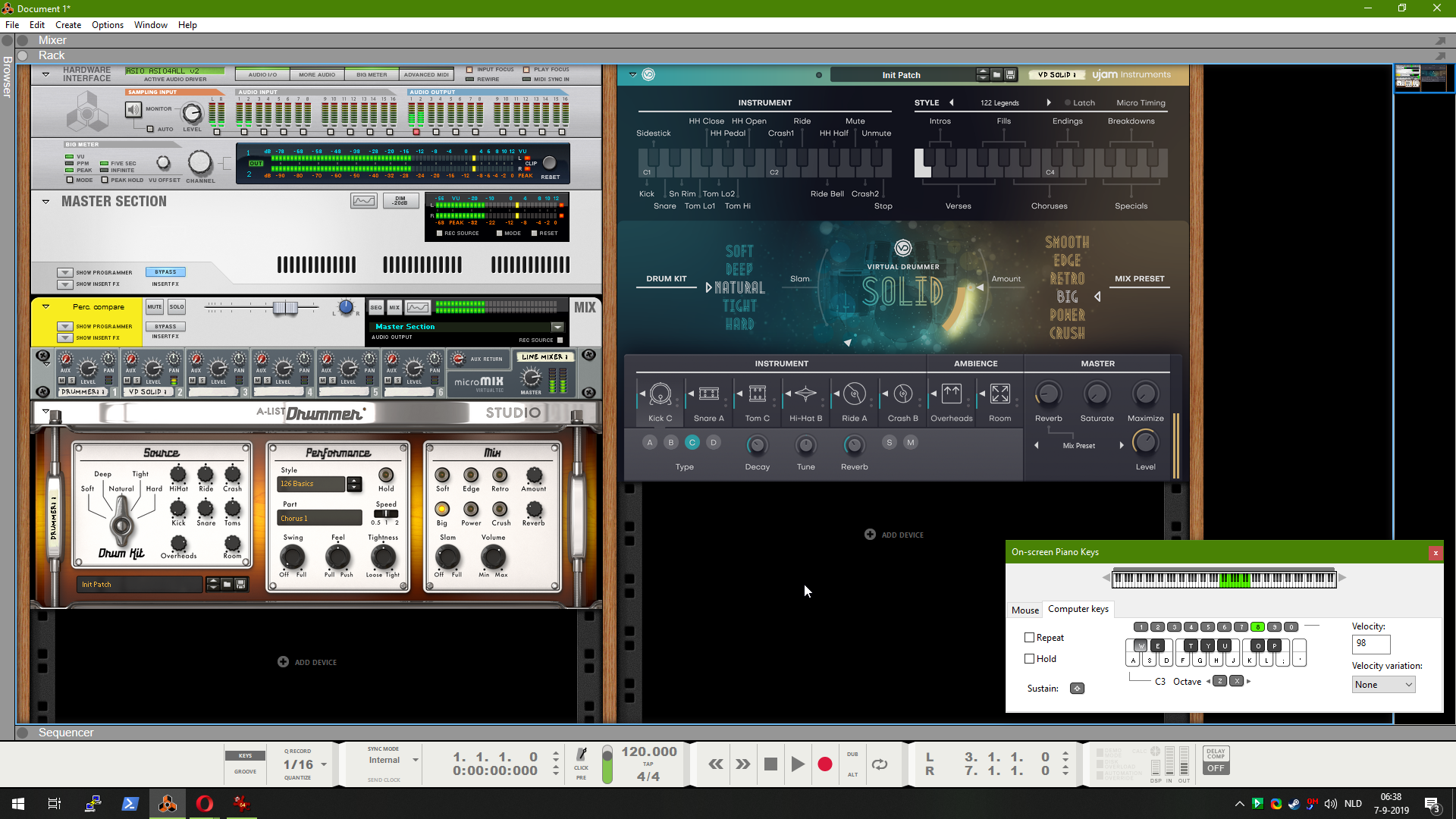 Here you can see me playing C3# (w on the keyboard) while Virtual Drummer shows me playing C3, what gives? Well, this is another interesting difference, there's actually a little bit of "AI" at work here. Not really AI of course but if you play the main intro then you'll get automatically redirected to the main verse, which I think is a very interesting feat. The same applies when you play fills section; this too gets exchanged for the main verse and back again.

Another interesting feat is that if you're playing some fills and then immediately press one of the main keys again (for example C4) then the fill will complete and only after it's done does the main beat kick in again. This is something you also won't find on the A-list instrument (not that I noticed anyway).

So is this the end for the A-List drum series? Well... obviously there won't be any new updates since they've been replaced by the Virtual drummer series. A series which in my opinion provides a very solid & functional replacement. But having said that I wouldn't discard the A-List devices just yet. Despite the overall similarities I think it's still fair to say that the A-List devices have a specific sound to them. One which isn't easily reproduced by the Virtual Drummer series. As such I wouldn't simply discard the A-List drummer devices if you still have them in your rack. However... I also don't think you are going to miss them either

cool comparison. But I found a bug if you use it as virtual drummer it does not play the first note of a pattern. I found it when trying to make an example that Virtual can do the same as A-List

Very high plugin. Useless space in the middle, it could be removed. Instead of a Reason-style design and contrast buttons, now something gray and shapeless.

Excuse me, is this a rack device? No, now it looks like a VST plugin. Not interested.
Top

Are these multisampled? If not, then why are they so expensive?
Top

future-bit wrote: ↑
07 Sep 2019
Very high plugin. Useless space in the middle, it could be removed. Instead of a Reason-style design and contrast buttons, now something gray and shapeless.

Excuse me, is this a rack device? No, now it looks like a VST plugin. Not interested.

I hear ya! The use of Space HURTS.

But, A-List sounds Great! - and, V-Drumss are a lot easier to deal with - for folks who need 'some' Visual Feedback.'
Keyboard/MIDI info...

And, I do like the kHs motif.
But, I hear you on Virtual Space considerations.

future-bit wrote: ↑
07 Sep 2019
Very high plugin. Useless space in the middle, it could be removed. Instead of a Reason-style design and contrast buttons, now something gray and shapeless.

Excuse me, is this a rack device? No, now it looks like a VST plugin. Not interested.

future-bit wrote: ↑
07 Sep 2019
Very high plugin. Useless space in the middle, it could be removed.

Definitely not removed because that section is interactive as well and allows you to select different drumkits. But I agree that it could be re-organized. On the other end though there are also plenty of users who sometimes complain about small devices which never resize. These options definitely make sure that you'll be able to see what you're selecting.

Also... when playing this device live then the visual feedback can honestly be quite useful. And thanks to its larger size you won't risk that your attention gets diverted to other stuff. IMO it's a bit of a gray area here. It is large, but it does add to functionality.

But... each to their own of course

I agree, I like the visual keyboard feedback when playing this live.